People are more connected than ever. As social media gains popularity, managing public relations becomes trickier. What used to be an insignificant faux pas can now turn into an international scandal instantly. In case of faux pas, brands now make sure to provide their clients with explanations or apologize if needed. Consumers seek authenticity so apologizing often seems like the best way to go.

Which emotions should a leader express when apologizing? To answer this question, we worked with Dave Scholz, Executive Vice-President and Consumer Vision Director at Leger in Toronto, to compare two apology speeches: one of the best and one of the worst. We analyzed both speeches with face reading technology.

In 2013, Chip Wilson, the Lululemon founder, did an interview with Bloomberg TV where he blamed women’s body rather than his company for a product recall. He said recalled pants became see-through because women’s thighs tend to touch. According to him, “some women’s bodies just actually don’t work”. Chip Wilson apologized but failed to address his controversial comments specifically. He did not apologized to the consumers he “fat-shamed” but to his employees:

In 2008, Maple Leaf Foods of Toronto had to deal with a crisis after an outbreak of the listeria bacteria in some of its packaged meat products. The company chose not to listen to its lawyers and take the blame for what happened. According to The Globe and Mail, this may have saved the company. CEO Michael McCain apologized and took the blame. The same year, he was named business newsmaker of 2008 by Canadian Press for his handling of the crisis:

Emotional summary refers to the average proportion of each of the six basic emotions (happy, sad, angry, surprised, scared, disgusted) and neutrality. These emotions were defined as “universal” by Paul Ekman, a pioneer in the study of emotions and their relation to facial expressions. Now, let’s see how this applies to our apology speeches. Here are the emotional summaries for both: 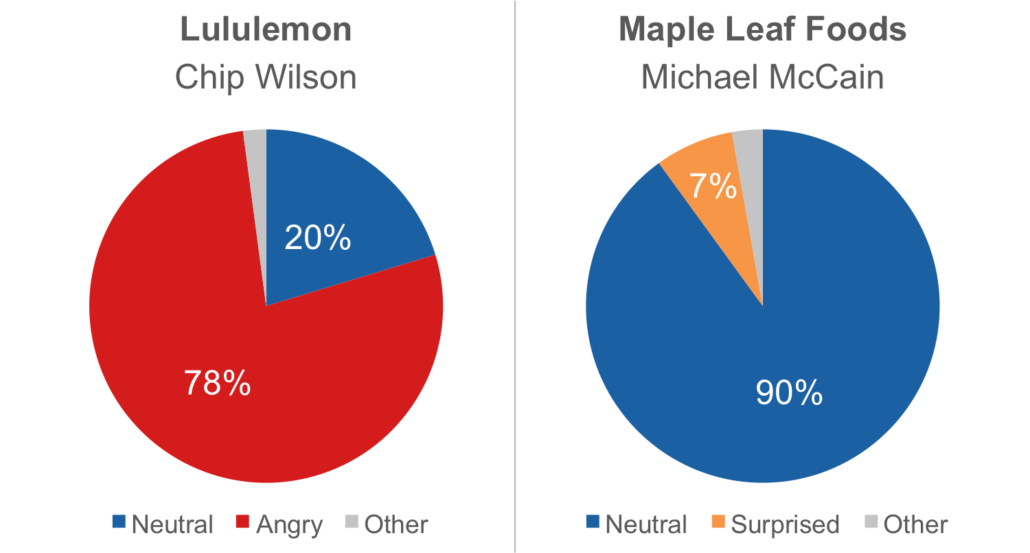 During most of this speech, Chip Wilson expressed anger (78%). At some points, his face became neutral (20%) but always went back to negative. On the other hand, Michael McCain’s expression was neutral (90%) during his speech. At some points, he raised his eyebrows, which explains his slightly surprised expression (7%).

(In case you wonder, there is no sound because the analysis runs in slow motion.)

Pretty unstable and negative isn’t it? Here is how it went for Michael McCain:

Contrast between both emotional journeys is obvious when we compare them:

Michael McCain is very neutral and stable in his expression. Based on these results, neutrality and stability are a winning combination for effective apology speeches.

Face reading is a powerful tool to improve leaders’ communication skills in corporate or political context. It is also useful to measure the effectiveness of video ads by monitoring consumers’ facial expressions when they watch them. In this context, we usually target positive emotional peaks with a surge at the end. Finally, it allows us to identify objectively what causes users to react when they navigate a website or mobile app.

Are you curious about face reading? Contact us to learn more!