Why Do Internet Users Block Ads?

Because of user experience issues. In a report about ad blocking released in June 2017, eMarketer reported several studies that came to this conclusion. According to the Interactive Advertising Bureau (IAB), Internet users mostly use ad blockers because “sites are simply easier to navigate without ads”. HubSpot and AdBlock Plus also came to that same conclusion in a survey conducted in June 2016: 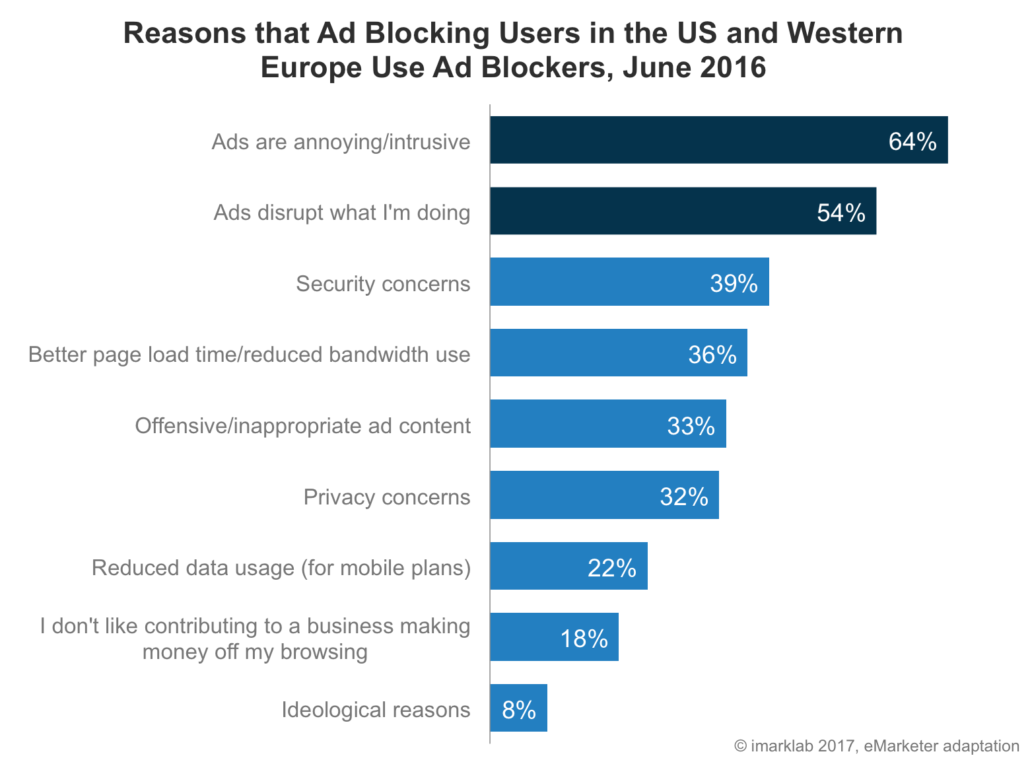 Users dislike intrusive ads but are still willing to accept advertising. They just don’t want it interfering with what they are doing online.

What is the Challenge for Publishers?

Define the optimal amount of advertising – somewhere between too much and not enough. Users will tolerate ads on your website if they are not too invasive. Most understand they need to view ads in order to access free content online.

In a lot of research projects, we studied users’ reaction to online ads while using websites or mobile apps. We tested several platforms that rely on an advertising-based business model to offer free online content. Their main challenge: find out how much advertising visitors are ready to accept to avoid chasing them away.

How to Find the Right Balance for Your Website?

The best is to test user experience and how your users react to advertising simultaneously. This will allow you to find out how ads interfere with what your visitors are trying to do on your website. We suggest you address:

Which formats are less intrusive according to your users? How often can they tolerate pop-up windows? How much time will they keep watching a video ad to access video content? Will they give up after five, ten, fifteen or thirty seconds? During tests, make sure not to address ad content. You want to evaluate what you can control. Sadly, there is nothing you can do if your users are not found of a new laundry detergent jingle.

What is “too much advertising”?

There is no exact answer. The right balance varies from a website to another based on content for example. We still established a few guidelines to figure out what is tolerable when it comes to advertising. These guidelines are based on 40 individual interviews about free online content. Here is what we found out for three ad formats:

It is the most annoying ad format according to our interviews. Sometimes, it even makes users give up on video content. A June 2016 survey from the Interactive Advertising Bureau (IAB) found that lengthy pre-rolls served against short videos and video ads without a skip button, were the most annoying format. In general, users expect to watch a 15 seconds pre-roll before a short video. After 15 seconds, they want to skip it.

They don’t want ads before each video either. Some feel annoyed when they have to watch the same ad several times in a row. eMarketer reported that 71% of Internet users worldwide agree that they often see the same ad over and over again. 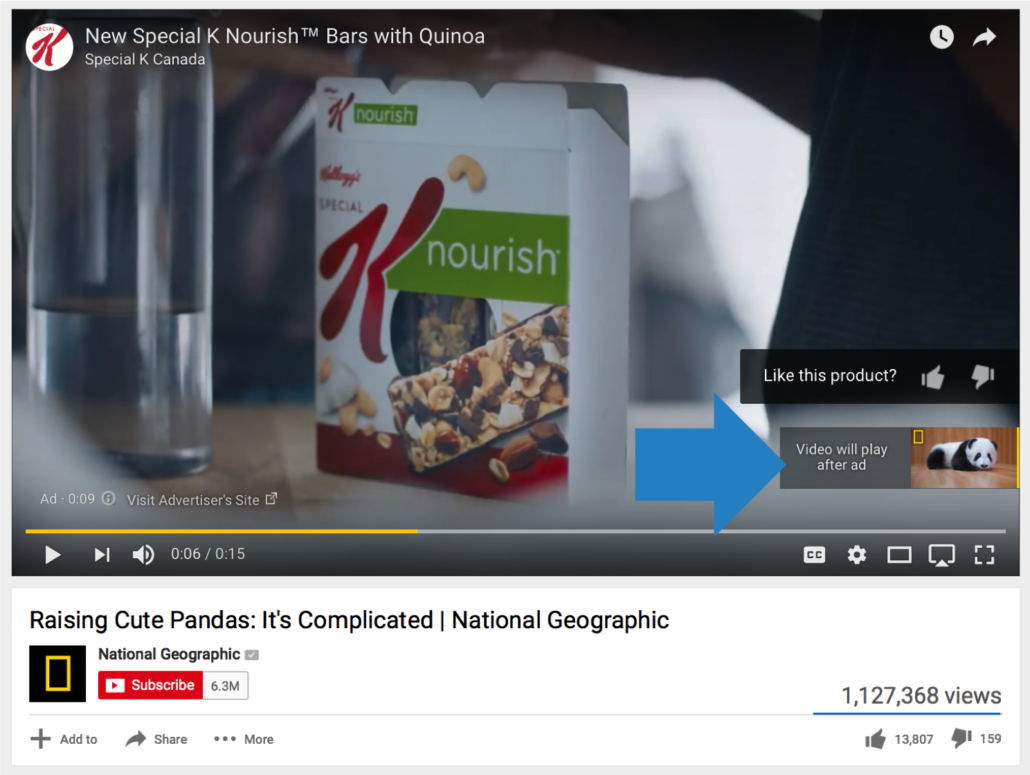 On YouTube.com, we are often forced to watch ads before videos we want to see. However, they usually don’t last more than 15 seconds or can be skipped after 15 seconds.

Interstitial advertising: invasive but can be tolerable

Interstitials are ads displayed before or after an expected content page. They cover the whole screen. You guessed it… Users find them very invasive. However, they can tolerate them if they are occasional and easy to close (e.g., visible “x” button).

When a visitor lands on Forbes.com, an ad usually covers the whole page for a few seconds. However, this only happens once when one enters the site and the “Continue to site” button is easy to locate.

Users don’t mind banner advertising. They consider it the less annoying ad format. In opposition to other formats, they appear in delimited areas. They usually don’t bother users when they are reading content. Of course, users do not like banner ads but tolerate them because they don’t disrupt what they are doing. On average, they expect banner ads to take a bit less than a third of the available space (27%). 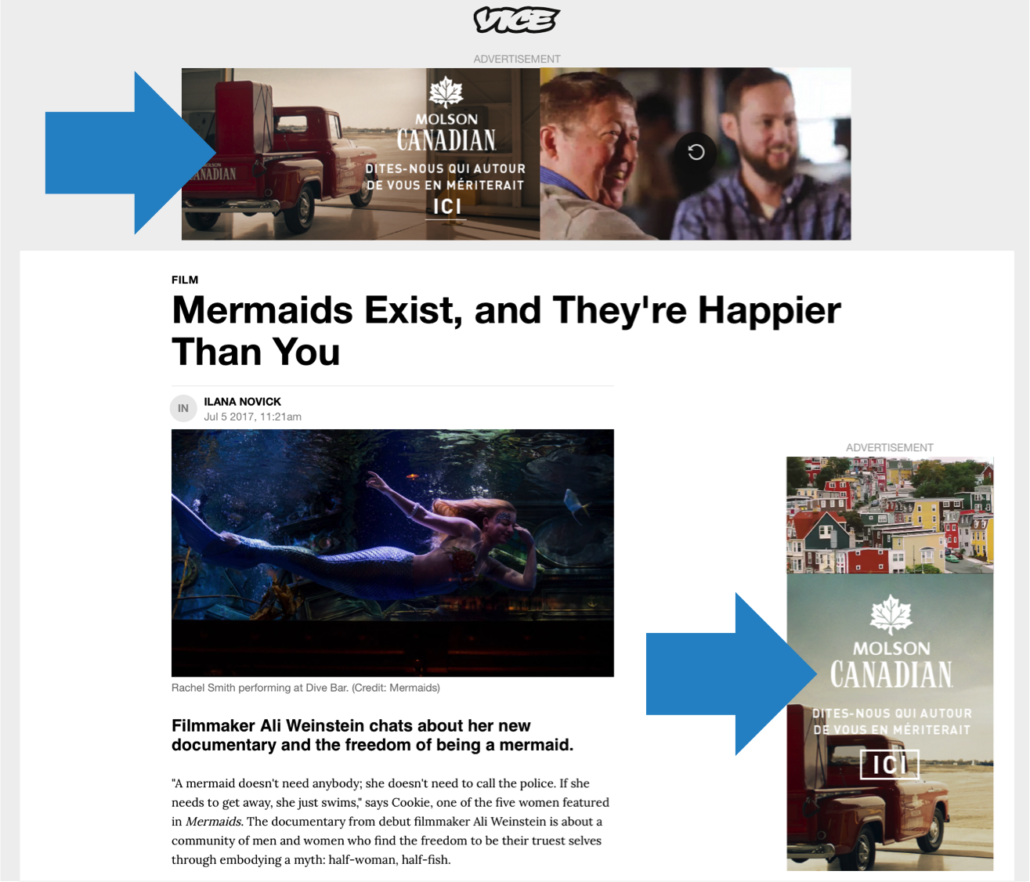 On Vice.com, we often see banner ads on top of articles and in the right portion of the screen. However, they allow users to read easily and take less than one third of the available space.

If you rely on advertising to monetize your website or mobile app, knowing how your users react to it is essential. It is in your best interest to provide a good user experience without too many ads. With this in mind, you will get more loyal visitors to spend time on your website and money out of your content. Do not forget to:

You need help figuring out the right balance of advertising and content for your website? Contact us to discuss your situation and learn more about our services!

User Research on a Budget
Scroll to top